Quote from Cynthia’s email, “Good day ma’am thank you for letting me review your amazing novel. I must confess it is nothing like I have ever read.”

A Book Review on ‘BATTERED’, a Novel by Mrs. Sinmisola Ogunyinka 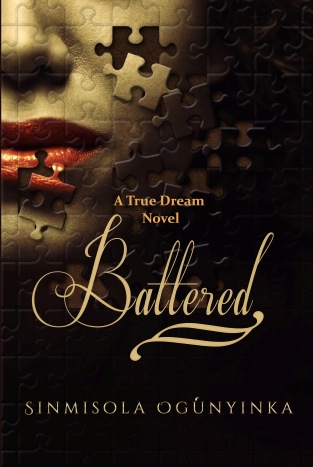 The novel ‘Battered’ is an inducer of what I would refer to as an awesome 90 minutes experience. Right from the first word, on the first page, in the first chapter, the reader is totally smitten by this well-crafted piece and one can feel a strong bond with the protagonist Jimmy. The novel is crafted in such a way that the reader is totally absorbed into the world of the characters. The reader gets to feel as the characters feel, see as the characters see and try to predict their next line of action., thereby giving the reader a first hand or ‘3D’ experience hence why I describe it as an ‘experience’.

The progression of the novel is steady and fluid with one event meandering through to another while still leaving an aftertaste of the previous event on your tongue. The novel Battered progresses so steadily, allowing a reader to totally grasp and soak in every part of this beautiful masterpiece. It is a toe-curling novel in which the writer utilises sparingly the element of suspense while gently nudging the reader towards the emotional state of the characters.

The novel Battered, though fictitious in nature is not dead to issues that bother the real world as the novel is daring enough to probe issues that are now being seen as a ‘Nigerian Factor’. Issues such as police brutality and what I would like to call the ‘Lazy Justice System’ (wherein the executive arm of government is overly reluctant to go about its duties) are openly explored in this gripping novel. On the issue of social vices, this compassionate novel calmly lends a voice to victims of rape, abuse and molestation in a society that tends to blame them for their cruel fate.

Another beautiful feature of the novel Battered is that it unapologetically marches on the grounds of the Christian Faith while waving the banner of celibacy and morality in a world poised for liberalism and individualism.

Battered is simply a novel in a cadre of its own. I would prefer not to refer to Battered as fictitious but as ‘a life book’; life because it serves as an expose of certain human struggles and pains but most importantly it comes bearing an important message which is that of the hard-to-kill HOPE.

The diction of Battered is lucid and very direct. It is a book I would love to refer to as a ‘humble’ book as it is not filled with overly bogus words but simple words knitted to intrigue the mind. The book has witty, dry humour and that familiar feel of conversing with polite old friends. The words in the book Battered are richly seamed together in such a way that reflects the wealth of the mind of the author.

Generally, the characters and their contrasting attributes though contrary, effortlessly complement each other in literary harmony; for instance, mummy and her dramatic nature, daddy and his placid nature.

In ending this review I would repeat myself by saying that Battered is more than a book, more than a piece of literature, Battered is an awesome experience that fascinates the mind, waters the eyes and warms the heart.