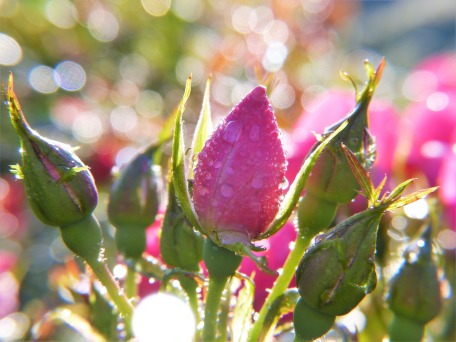 Captain Raziel, a captain of fifty, walked into the inner chambers of his home and looked around at the beautiful silk draperies and gold pillars. He lived well. As a young man serving in the king’s army, his family was proud of his achievement in battle. He clutched his sword and felt the slipperiness of his sweat on the metal. He should be headed out, but his heart thudded in his chest. Would this be the last time in his home? What manner of assignment was this? He could face off the meanest Philistine, but a prophet seated on top of a hill.

Shira walked up behind him and he stiffened. She was the last person he wanted to see, not when he was covered in trepidation and sweat.

“I heard the news in the vineyard.” She pressed herself to his back. “Two captains with their fifties already gone without returning.”

He turned into her arms, her warmth. He would die with a sword in his hand, fighting for his king and his kingdom, not burned up like a sacrificial lamb!

“Saw everything. The burned bodies of mighty men, strewn across the valley with the evil birds feasting already.” He heaved a heavy sigh. “I know, Shira my love.”

“No one knows what the prophet has done to them.”

“I have been asked on the king’s errand, Shira, wife. To bring the prophet on the hill to the king.” He cupped her face. “I am the third captain to be sent.”

Shira screeched. “No, you must refuse. You cannot…the king cannot risk you like that!”

He stepped away from her. “You know that is not possible. If I refuse, I will be beheaded immediately!”

“I am a soldier and my life is pledged to the cause of the king.” He pressed a kiss on her forehead. “I must leave now.”

Raziel did not want to look into her eyes, but he did. “Be strong, my love. Take care and the Lord be with you.”

He tore away from her and marched on, her voice in tears and prayers trailing him.

“The Lord bless you! And keep you! And make His face shine upon you. And be gracious on to you, Raziel, son of Asher! The Lord lift up His countenance upon you. And give you peace…”

He said the “Amen” to her every prayer until he heard no more. His men waited, and he saw the fear on their faces and prayed they drew strength from him. He did not have any comfort for them however, they were all obeying the command of the king.

They marched on to the foot of the hill, fresh scent of burned flesh, with some of the smoke arose. Raziel motioned to his men to stop and be quiet. Then he climbed on to the side of the hill, his arms raised above his head. It made him look weak, but he knew he heard the word of wisdom in his spirit on how to proceed. He was not about to let ego or disobedience to the voice destroy him and his fifty.

Elijah sat with his face turned to the ground, a hairy man who wore a leather belt around his waist. Raziel had no idea what to expect, but not this bundle of vulnerability.

No movement, no words. The prophet continued to stare at the ground, and he remained on his knees, his head bowed. Then, he felt rather than heard or saw movement. Prophet Elijah stood. He took a few steps forward and Raziel raised his head. The look on the prophet’s face drained energy from his bones but also sent a silent message, “I will go with you.”

Under his breath, Raziel moaned. “Jehovah be praised.”

Register for my amazing and free Creative Writing Class on Facebook

– Gain confidence in your writing
– Learn from a passionate teacher
– Read and write like a pro
– Start now, entry closes in a week, fill the short form below now!

This site uses Akismet to reduce spam. Learn how your comment data is processed.