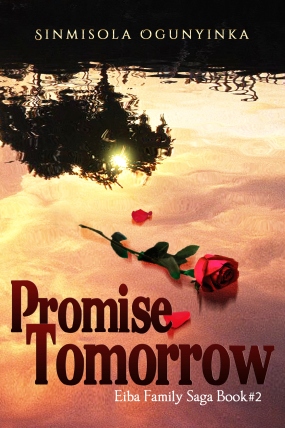 Modele Eiba sat easy in Jude’s leather swivel chair, and turned around mischievously. Her action bespoke that of a little child Modele was far from being. In a few days she would be twenty-six years old. Tall and slender with a full bust and small waist, her complexion was a rich chocolate cream, coupled with a flawless skin.

At her age, she was an accomplished woman. She had a private hobby she had brought into the public through her freelance writing. She was also a shareholder in her father’s multibillion naira company, Decoy Holdings.

In a few days, at her birthday party, she planned to announce her wedding date to her friends and family members. It was a day she looked forward to. She only needed to settle this with her fiancé of eight years, and first love, Jude Anja.

Eight years! She couldn’t believe the years had gone by so fast. Even though most of them had been spent pursuing their separate careers, Modele couldn’t but help wondering why they had wasted so much time. Of course, Jude had been particular about establishing his law firm. Well, Jude had done just that, and it was finally pay day. All the years they had both spent, labouring and loving would now be rewarded with the nuptial cord.

Modele let out a whistle and laughed, swivelling round again. Seated in Jude’s office, she now appreciated the efforts, time, and money put in. Her time, most importantly. She had had to wait for three years while Jude accomplished his dreams. Three years she believed could have been much shorter had Jude accepted her father’s offer of help. But Jude was too proud for that.

Being the son of a multimillionaire did not stop him from believing so much in “working for your money.” He would not walk in his father’s shadow neither would he walk in hers.

Jude had his high-class law firm, his ego, and his woman. The firm boasted of five associates and three partners. There were eight employee lawyers on the team, and a handful of non-technical staff, the accountants, secretaries, and office clerks. It was a positive effort being well rewarded. She was glad she could now have her man back.

The three years had been an unquestionable three years of stress and a test of their love, and Modele was glad they had passed the storm, victorious. When at the previous Christmas party of the firm, Jude had proudly told the staff, associates, partners, and clients of Jude Anja Chambers they had met their target in all ramifications, Modele had taken it to mean he was now ready to concentrate on other things apart from work. Marriage, to be precise.

He had not made such pronunciation at previous gatherings. It now gave her the boldness to congratulate him, and suggest they had a meeting to fix their wedding day.

She checked her wristwatch and sighed. She was too excited to wait. Jude wasn’t one to keep late but the weather had been funny lately. Rain in March was odd, but not totally strange in Lagos though this one had gone along to flood some streets. It had rained continuously for the past few days and yet, the clouds had already gathered again, threatening to let all hell loose.

Modele rested her head back and closed her eyes. She breathed in the crisp, cool air of the air-conditioned room and smiled at herself. She had been smiling a lot to herself since Jude’s announcement. She had chosen his office as their meeting place because she knew it was the best place to discuss freely and seriously. Jude always attached importance to anything that took place in his office. Anywhere else was forfeit. She had been elated when he agreed. It meant he also understood the import of the meeting.

Though an office, the atmosphere was alright for planning their future. The floor was carpeted wall-to-wall with a deep leaf-green colour. Reflexive sliding doors and panes surrounded the office, enabling Jude to observe whatever went on around him outside the office without a reciprocal effect.

A small section of the large office accommodated a living area, tastefully furnished with leather settee and two single couches. A low glass centrepiece added glamour to the area. A medium sized refrigerator hummed at one end of the living area. It was ideal for a private conference even if someone else was in the other part of the office.

The other part was the office area. A large leather swivel chair sat behind an executive all-glass table. Jude had always had a thing for leather and glass. Modele was indifferent. Lining one side of the office was a ceiling-to-floor bookshelf, with more than enough books to fill. Modele shook her head in amazement. Aside this elaborate bookshelf, Jude had a standard law library within the premises. Jude was full of it all, himself, his career, and his achievements. Who wouldn’t be? Modele loved him for it.

She was proud of every single thing he had done. What more could one want in life? A good job, a good wife, some good money, stability in life, peace, joy, God… Jude definitely had a friend called luck. Or for a Christian like him, a purpose-driven life, destiny, favour, and God.

She remembered when they first met. She was barely eighteen years old and the attraction had been extraordinary and instant. They had met in the law faculty of University of Cambridge and discovered they were both freshmen. He was just a year older, but looked so much more mature. Modele had never dated anyone before him, and he fondly called her his “green-eyed daddy’s girl.”

Jude took that off her. He was full of fun and all of life’s excitement. Modele had been so taken with him he soon became her alpha and omega. And she had never regretted loving him, except for the unnecessary length of their courtship. That would be over soon.

She had insisted they announce the wedding date at her party, called the so-important meeting so they could have their privacy and the serious atmosphere needed to take a decision as well. The office had been his compromise. Over dinner would demean the importance of what she had to say. She knew he would take calls in-between their discussion and it rankled. What privacy could she get here, she thought warily, and checked her wristwatch again. Jude was already thirty minutes late.

She picked up her blackberry and dialled his number. There was no response. Where could he be? Jude was a stickler to time. He never missed appointments. Especially this kind of appointment that bore seriously on his future. Their future.

The intercom rang, catching her unawares. She picked the receiver and greeted. It was Jude’s secretary, Angie.

“Jude called,” Angie said, in a small, friendly voice. “Asked me to tell you he’s caught up in traffic. Said you can leave or wait for him.”

“If you need anything, please let me know.”

“Okay.” Modele hung up before she did.

Why would Jude call Angie instead? If he was in a traffic jam, why didn’t he pick his call?

Modele shook her head. She knew her Jude. “He’s lying.”

She pushed herself out of the chair and walked absently to his bookshelf. His books fascinated her. He had everything, from law to medicine to gardening.

She ran her hand through the books as she thought of what to do. Traffic in Lagos could be anything from one to five hours or more. She had been sure he would be in the office for their noon appointment. Sure he would not have an excuse, Jude had left the office to avoid her.

Did she detect reluctance here? Her hand rested on a book on marriage ceremonies in East Africa, and she pulled it out. “I’m frustrated!”

She leafed through and dropped it on the carpeted floor. The soft thudding sound it made gave her an idea she knew would drive Jude Anja mad but with a giggle, she followed through on it. Randomly, she brought books out of the shelves and flung them around.

It took her time. It was his fault making her wait, knowing how much she hated to wait. For anything or anyone. Jude loved his books like a second wife. And he arranged them with care and affection. She knew scattering them would jeopardise their important marriage discussion but she was beyond reason.

When she was tired and the floor was almost covered, she went back to the book on eastern Africa marriage rites and sat on the floor with it. She would wait for him. The pictures in the book were intriguing, and she was soon lost in the captions that accompanied them.

But not for long. It was almost three o’clock. About two hours since Angie’s call. She stretched her neck, and squeezed her eyes. Maybe she should arrange his books back and go home. He would still be upset anyway, because only Jude knew how to arrange Jude’s books. Better to be on his good side than otherwise. She picked the books one by one, and pushed them back into the shelves, until she saw a plain, white envelope at the back of one space. Jude’s name was written with pink highlighter.

She brought it out and turned it around. The envelope looked unopened. She thought it would be her weapon to pacify him when he saw how untidy his shelf was. Her discovery should please him, especially if the documents were important. Jude was in the habit of hiding things and then tearing himself apart, looking for them. She turned the envelope over and discovered it had been opened. Carefully, she kept it on his table and continued to arrange the shelves.

Jude walked in another three hours later. He obviously wasn’t expecting her to be there. Angie had closed and so had most of the support staff. He looked worn out but that was not what informed his reaction when he opened his posh office door and walked in.

Modele was seated yoga-style on the floor, facing the door. Her eyes were closed. Her lips moved as though she muttered a prayer. Photographs, most of them torn, were strewn on the carpet floor around her. The plain envelope with the pink name was torn in between Modele’s crossed legs.

Jude walked in slowly, taking in the scenery before him. His gaze darkened, and he took a deep breath. His eyes followed the trail of pictures. They were taken at a beach side in an island. There were two people in the photos.

This site uses Akismet to reduce spam. Learn how your comment data is processed.